Given the $38 billion of assets under management at Elliott, this is quite a substantial position for them, although little more than 1% of the market cap of AT&T.

Having followed AT&T for more than 25 years and been short it for the last 15, I was quite intrigued and jumped right into reading Elliott’s letter to the AT&T board.

Among other things, Elliott wants AT&T to consider divestments, cost-cutting and management changes.

They must be dreaming.

The first 10 pages of Elliott’s letter do an excellent job of going through why we have been short the stock for a long time.  In particular, I enjoyed this chart, showing how AT&T has underperformed the S&P 500 by -150% in the last decade.

While you would not have made an absolute return short AT&T, that generated some great “alpha”, and range trading it had been an absolute home run!

The letter goes through the litany of problems including bad M&A, lack of innovation, product issues, management departures and just the general poor performance relative to peers.  AT&T has a reputation for heavy staffing in corporate, strategy and lobbying, so I’m sure they had 50+ people looking at the letter the morning it came out.

Elliott deserves credit for a great review of WHY the company has underperformed, but when it comes to their proposed plan… there isn’t one.  Rather, there is a plan to have a plan.

They do state some things the company should consider, such as divestments (they already are), better management of operations (novel – surprised the board hadn’t pushed for this one), a formal capital allocation framework, and enhanced leadership and management.  This last one is probably the only one we think is realistic but it comes back to the central problem with AT&T that Elliott doesn’t seem to even know about: every one of their businesses is in secular decline.

The ultimate issue here is not the management, but the business.  With this set of assets, there are literally no options for them to return to real growth.

One example is Elliott’s comparison of the (higher) margins at Verizon’s wireless business versus those at AT&T.  They fail to take into account, however, that Verizon’s business does $21 billion of revenue versus only $9 billion of service revenue at AT&T’s wireless business.  Not to mention that Verizon has invested many more billions of dollars across the last 15 years!  Not surprising that a business with much higher investment and greater scale does higher margins.  I am not sure how you close that gap quickly or at all, to be honest.

There are some other big issues we have with the letter including the whole discussion on valuation.  Elliott argues it is cheap on GAAP numbers, but this company does more adjustments than almost any other we have ever seen, and we believe FCF is 30% lower and the debt, 30% higher.

We just come back to one point – if the company could have done any of the items Elliott wants them to do, don’t you think they would have done it already?

These are not dumb guys – the management and board – and they can hire the best (and most expensive!) strategic minds in the world.  Now we know that may or may not be worth anything, but the issue here is the underlying business.

We have a strongly held view that the best move for this company is to CUT THE DIVIDEND and INVEST, as a way to stem the declines and maybe stabilize the businesses.
People will continue to use mobile phones (AT&T Wireless) and watch movies & TV (Warner & HBO) so those businesses could actually even grow. But without significant investment (and therefore dilution) they will shrink from here.
However, with 43% of AT&T shares held outside of institutions (most likely individuals) we think this (the dividend cut to fund the investments) will never happen, as they almost certainly will not actively dilute earnings.  Instead, they keep taking actions that passively dilute them by buying declining businesses.
The best news for shareholders is that the compny has gotten so big and indebted that now there is almost nothing they can buy to keep the music going.
At best, AT&T is a stock you can short in a trading range for the rest of our careers (we plan on another good 25+ years) and at worst it is the next General Electric (check out THAT chart), even though there are some key differences between both companies.  We will be writing a lot more on this subject in coming days.
One last thing: we do think a lot of the folks at Elliott and they have a great track record.  It does not mean they get them all right, though, and look at the chart (below) of their most recent foray into telecom with Telecom Italia: 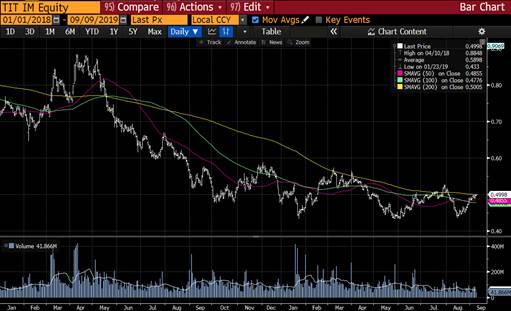 Enrique Abeyta is a portfolio manager with 20 years of experience covering the media industry.  He now writes for Empire Financial Research and will soon launch his own newsletter.